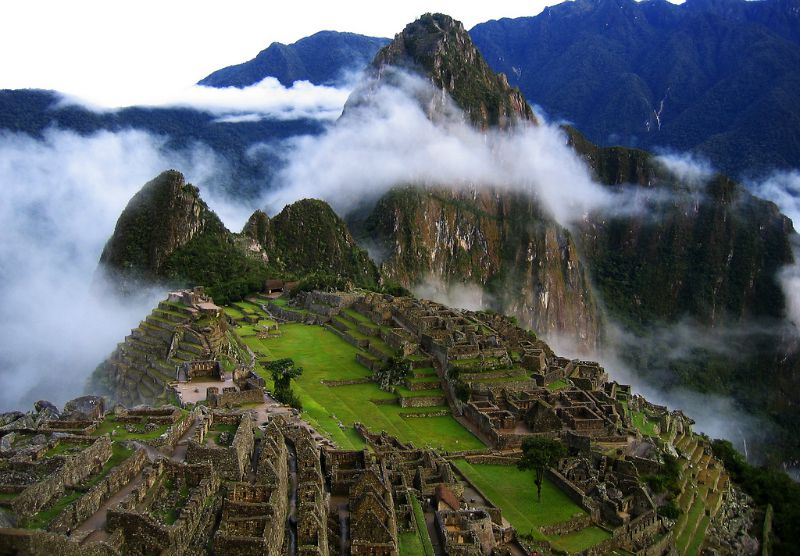 The hotel is located in South Chile, and made beautifully into the volcanic mountain with the fountain on top of it.

The hotel is a hidden jewel in the 300000 acre natural reserve.

9) The Cliffs of Etretat, France

The cliffs of etretat surround the city of Etretat and look magnificent as you walk through them. These limestone cliffs have been inspiration to many artists because of their beauty.

8) Garden of the Gods, Colorado

Balanced Rock in the Garden of the Gods, Colorado has been a spot for photography and is accessible via a paved road. The rock weighs 700 ton and has been standing there for thousands of years now.

FairyTale forest in Netherlands looks breathtaking with colorful leaves all around and the shades of light as the Sun sets and rises.

The midway island is located between Asia and the United States. This is the most secluded island and a home to huge albatross population.

Salar De Uyuni is the biggest salt flat in the world, located in South West Bolivia. Its unique landscape makes it a photographic heaven and the surface reflects like a mirror post-rain.

Photo by Dimitry B

Angkor Wat is Buddhist temple that is the main attraction for visitors visiting the country. This temple is also one of the seven wonders and the largest religious monument of the world.

Located in the most popular tourist destination of the world, Tuscany is the most popular places to visit in Italy. The city houses extraordinary sculptures and paintings and architectural wonders.

Formed by the flow of lava from millions of years ago, Giant’s Causeway known for its polygonal sections of basalt layered over each other. It is also the only World Heritage Site in Northern Ireland.

Reed Flute Cave is a natural limestone that is fitted with multicoloured lighting. Natural

We Hope You ALL Enjoyed It!!

Go Back to Part 4 HERE

Go Back to Part 3 HERE

Go Back to Part 2 HERE

Go Back to Part 1 HERE