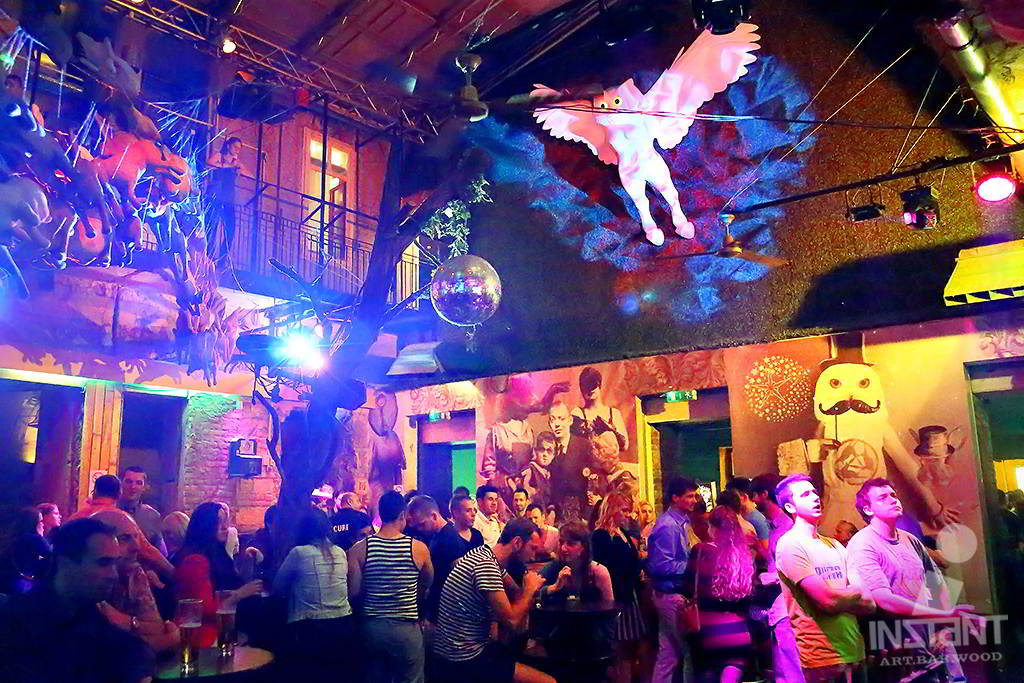 For young travelers, Budapest is the promised land. The hostels are cheap, the beer is cheaper, and the nightlife in places like Budapest’s Instant Ruin Bar is exactly what most university students on holiday are looking for. The biggest nightlife attractions in the city are the ruin bars, and the largest ruin bar in the city is Instant. Let us explore Budapest’s Instant Ruin Bar.

Ideally located in the center of Budapest, Instant Ruin Bar boasts 26 rooms, 7 bars, 2 gardens and 7 stages. You could spend an entire night at this club and still miss some of what it has to offer. Between the flashing lights, pounding bass, and drunk university students shouting about how much they love everyone in the bar, you find a club that sees thousands of diverse young travelers every night.

If you find yourself at this ruin bar, be prepared to take shots, dance, and even (probably) make out with people from every continent and every background imaginable. The right night at Instant can give you stories to tell for years.

Entering Instant is like the scene where a hero enters a burning building in an action movie: You can barely see from all the smoke. Cigarettes are cheap in Hungary, and at the first room on the ground level, smoking is allowed.

Whether you’re a smoker or not, you’ll probably have a round in this room at some point in the night and find it’s the best place to look for a conversation over a beer.

The Night Owl at Instant (image courtesy of instant.co.hu)

Almost everyone will be drinking the local draft Dreher, a sweet beer that you won’t be able to escape in Budapest. (You’ll probably like it, though.) Most pints are around 600 forint, which translates to about 2 euros. If you weren’t drunk when you showed up at the club (this is EXTREMELY unlikely), then I recommend catching up with the other bar patrons (who will be very drunk when they get there and more drunk by the time you get there) in this first room.

Once you’ve consumed a sufficient amount of social lubricant, you’ll want to make your way from the smoking room to the rest of this gigantic bar.

The only constant is the bar’s mascot, an owl. You will see owls everywhere in the club. Pictures of human figures with owl heads cover the walls, and in the courtyard, a life-size mannequin of a woman’s body with an owl’s head watches over the romance and debauchery going on in the club each night.

Each stage at Instant ruin pub has a distinct musical theme, and while not every stage is in use every night, you usually find a good mix of hip-hop, pop, house music, and even some more experimental varieties (the basement is good for this underground style). Instant is like several clubs within one big club, and the types of people you meet at each stage vary as much as the types of music.

A Dance Floor at Instant (image courtesy of instant.co.uk)

Since other patrons of the bar are either fellow travelers or locals who know that you’re a traveler, it’s easy to make friends. Stakes are low, and spirits are high (like I said, the booze is really cheap). You might find yourself having a very long drink with another student on holiday telling you stories about his hitchhiking experiences.

You might find yourself on the dance floor kissing another tourist you met on a walking tour earlier that day.

And while great conversations, fast friends, and faster romances are common to clubs everywhere, Budapest’s Instant Ruin Bar seems unique. The mass of humanity going in and out of this club is more interesting, more alive. Maybe it’s because the place is so grungy and full of old, mismatched stuff — It draws mismatched people who are just looking for a good time and an adventure with other travelers. Maybe it’s because everyone ends their pub crawl here, and you can be sure that it’ll still have a crowd dancing at 4 AM.

Something keeps bringing people back to Budapest’s Instant ruin bar, but I don’t think anyone knows what it is — And I don’t think anyone cares what it is, either. Whatever draws them, at Instant, diverse young travelers find a place to lose their inhibitions for a while and enjoy a great time dancing and drinking and breaking hearts with people they’ll probably never see again. Find out more about the bar.

Like most clubs in Eastern Europe, if you went there every night of your life, you’d start to hate Instant.

If you land in Budapest’s Instant Ruin Bar at the end of a pub crawl, though, you just might have the best night of your life.

David is an avid travel writer who enjoys exploring the globe, he produces some of the travel feature articles here at Gloholiday.