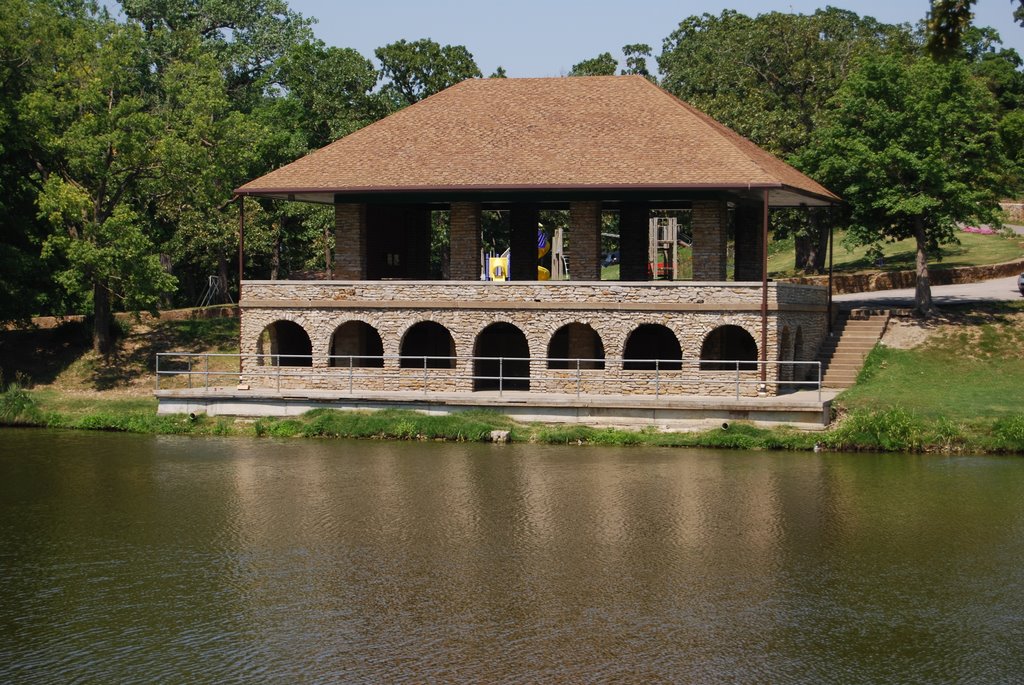 Many travelers enjoy exploring sparsely-traveled routes during their travels but they often discover that these less-traveled paths limit them to what they can see in each site. Some sites feature historic or environmental spots while others showcase different kinds of attractions.  If you’re planning on a trip “out West” you might want to stop off in Fort Scott Kansas, a small town of 8,000 residents, where you can have it all — history, culture, education and a slice of real America.

Just outside Fort Scott you can park on the side of the road and walk along a short trail to the spot where the water from the Rock Creek Lake spills down on its way to the Marmaton River.  There’s a picnic spot in the park before you start down the road to the waterfalls and when you’re at the waterfalls, if the water level is low, you can walk across the stream. The first waterfall is at the end of the trail and, if you walk a little further along the riverbank, you’ll reach the other two waterfalls. If you feel like a bit of a hike you can walk to the Rock Creek Lake Waterfalls Park from Fort Scott but if you’d prefer to drive, you can follow 19th Street northward out of the city for approximately 3 miles until you see the park’s parking lot on your right. From the park, simply walk along the trail, cross over the dam, and you’ll see the waterfalls.

Fort Scott was one of America’s first military outposts to be built along the Santa Fe trail. The government stationed troops there in 1842 to help keep peace between the westbound settlers and the Osage Indians and the troops’ work was compounded when, prior to the declaration of Kansas’s statehood, pitched battles broke out between abolitionists and citizens who wanted Kansas to enter the Union as a slave state. When the Civil War broke out Fort Scott became a Supply Depot. It was also the base where black soldiers were trained as part of the First Kansas Colored Infantry.  The National Parks Service operates the Fort Scott National Historic Site where you can see some of the fort’s original buildings  and hear costumed guides provide a detailed description of frontier life during the mid-1800s. During the summertime the tours begin at 11:00a.m. and 1:00p.m. You’ll find the fort on Market Street, south of I54, near the city center. (620) 223-0310

Military troops were already being buried in the Fort Scott military cemetery before the Civil War but by the war’s end President Abraham Lincoln declared it a National Cemetery. The cemetery was first established to hold the remains of soldiers who died during the Indian wars and during the period when “Bloody Kansas” saw early fighting between abolitionists and pro-slavery forces. There are also many Civil War troops buried at the Fort Scott cemetery including members of the First Colored Infantry whose unit suffered more casualties than any other Kansas unit. After the war soldiers who had been buried in makeshift graves were reinterred in the Fort Scott National Cemetery. In the northeast corner of the cemetery there are memorial markers that commemorate fallen soldiers whose remains have not been recovered or identified.

The famed photographer Gordon Parks was born and raised in Fort Scott. He achieved success in the 1970s as the director of the movie “Shaft” but before his movie career he was already recognized as a humanistic photographer who brought the reality of the Southern black experience to the public eye. Park’s work was featured in a number of well-known newspapers and magazines including photo essays for Life Magazine. Parks photographed celebrities and fashion models but his best-known pictures were those which showcased the racism and poverty with which southern blacks contended during in the pre-Civil Rights era. The Gordon Parks Museum of Fort Scott is located in the Mercy Health Center just off U.S. Highway 69. Entrance is free and many of Parks’ photos can be seen in the museum. The museum opens daily from 7:00a.m. to 8:00p.m. 620-223-7036

In 2007 Lowell Milken, an educational visionary, and Normal Conrad, a Kansas teacher, teamed up to establish a Center in which student projects about unsung heroes would be highlighted. Milken and Conrad were inspired by a group of Uniontown schoolgirls who had turned a school assignment about the Holocaust into a wide-ranging project that highlighted an unsung hero of the holocaust, Irena Sendler. Sendler saved over 2500 children from the Warsaw ghetto by smuggling them out and finding hiding places for them but her story had been lost to history. Using the Uniontown girls’ work as an example Milken and Conrad created the Milken Center which promotes excellence in the schools by encouraging students of all ages to undertake project-based learning projects. The Center, located in Fort Scott on Main Street, offers visitors the opportunity to view many of the submissions including the winners of the Center’s annual Discovery Awards.

Fort Scott’s annual three-day “Good Old Days Festival” is a highlight of early summertime in Western Kansas. The three-day festival brings fun and excitement to the town with a crafts street, rides, street dances, carnival food and drinks, live entertainment and more. There’s  a Dock Dogs competition in which people bring their dogs to a pool and throw a toy in the air over the pool. The dog that jumps the furthest to catch the toy wins the competition.

Historic Folly Beach: From the Bohickets to Porgy and Bess
A Guide To Seattle