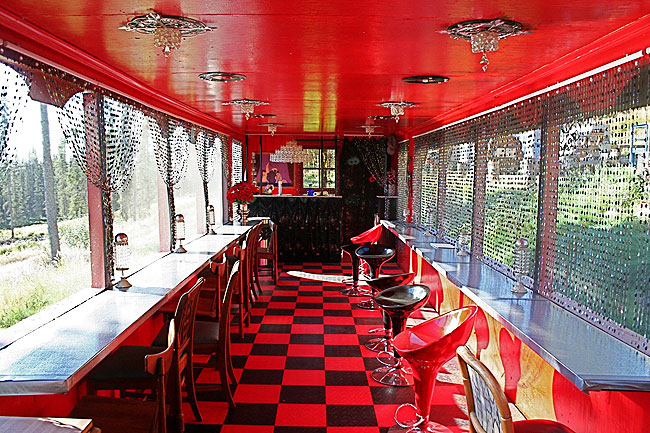 The Aurora Express Hotel Train in Fairbanks provides a unique and truly magnificent opportunity to see the fabulous beauty of Alaska from the windows of a luxury hotel train.

The Aurora Express is a ‘Bed and Breakfast’ rail car hotel based in Fairbanks, Alaska. The hotel train is made out of authentic railroad cars renovated to match precise historical periods. These vintage rail carriages carry a lot of history. In fact the carriages were all set to become a train museum until owners, the Wilson family decided to turn them into a Bed & Breakfast train hotel for paying guests.

Now, the old former railroad cars sit high aloft a hill overlooking the Alaskan city of Fairbanks. In case you wondered Fairbanks is the largest city in the Interior region of Alaska.

The Aurora Express train hotel is made of different rail wagons, each of whom lived their own life and history. Recording Life in various guises that went on the railways of the United States, more than half a century ago. Experience the city of Fairbanks and the remote wilds of Alaska onboard this nostalgic Bed & Breakfast express train. The train journey overlooks greater Fairbanks, the Tanana Valley and the picturesque Alaska Mountain Ranges. One thing is guaranteed, splendid views on all sides including the Northern Lights and snow capped peaks.

If you are not able to travel to Fairbanks, Alaska to travel on this remarkable express train, never mind. Rather sit back and enjoy this selection of videos taken from the Aurora Express Hotel Train.

Interested parties soon realize that Hotel and Motel lodging just can’t compare to the breathtaking views and unforgettable memories you’ll have after taking a stay on the Aurora Express Hotel Train.

See Alaska on the Aurora Express Hotel Train. Antique chairs have been carefully restored and ready to once again serve the guests.

The Golden Nellie rail carriage is a cozy place within the train for those who are accustomed to the best and is not going to follow in spite of their habits, even in a wilderness like Alaska. The glittering gold-plated ceilings, heavy velvet curtains, a huge bed and a private bathroom. Actually, all of these are features of the luxury of traveling on the train and are at your disposal.

Antique chairs have been carefully restored and ready to once again serve the guests, and a soft shelf to observe the surrounding landscape can be elegantly down to the golden stairs. Totally beautiful.

National Emblem is a carriage within Aurora Express Hotel Train for those passengers who travel in pairs, are from large companies, or for those guests who just like more freedom to wash. There are four separate rooms, special room and as many as as two bathrooms in these suites.

The Gold Mine Car

The Gold Mine rail carriage is one of four stylish cars onboard the “Aurora.” Large beds, ornate bathrooms, high ceilings, blown Italian glass chandeliers and antiques feature. There is lots of attention to detail evident on this meticulously designed rail carriage.

Much of the coupe is decorated according to the interior of the century fashion.

The Gold Mine rail carriage on the Aurora Express is decorated in gold tones, as in the houses of the rich. Those who made their fortunes during the two ‘golden fever periods’ in Alaska.

This train carriage is a 1956 Pullman sleeper. In fact it is one of only 11 made in this train series. It has been divided into several unique suites. Each of these suites is decorated to represent a different time period in the history of the Alaskan railroad.

in fact, is the second of the four compartments. The decor is in the style of the church, a lot of bright colors and even the Catholic crosses on the walls. High ceilings beautifully decorated with “broken” glass, which looks great set against the wicked sky and mountain vistas.

The Bordello name speaks for itself: the style of a brothel, vivid colors, crystal chandeliers, ornate ceilings, king size bed, you probably don’t want to place the kids in here.

The Can-Can as claimed by the owners. One look at the interior of this rail carriage makes guests want to dance up and down with joy, as the artist of the corps de ballet. A bright, elegant and cozy rail car at the same time. What more could one want?

Once upon a time, this Arlene rail car was used as a mobile hospital. Now, restored and improved, it is quite ready to accept guests with healthy kids. There are separate rooms in the Arlene rail car for both adults and children.

A separate carriage is the dining car. Here there are 24 “landing” sites, televisions, telephone, music, painted ceilings. In this rail car an unknown creator in a fit of inspiration, depicted the northern lights. Of course guests will find delicious food here also, of course.

Diving Between Two Continents, Diving in Silfra
A Cold Break at the Aurora Ice Museum Hotel in Alaska