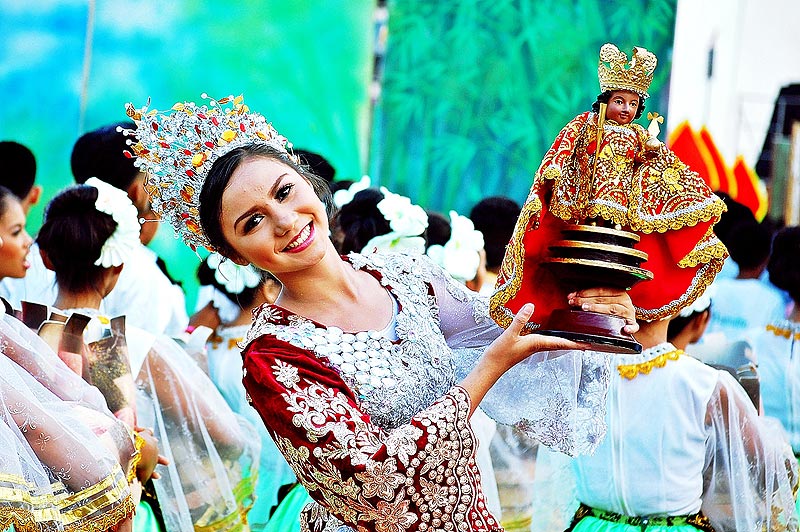 Get a unique glimpse into Filipino culture by seeing one of the country’s many festivals. There are plenty of Philippines festivals to see in 2017. Most of the festivals here are rooted in the Catholic faith.

Cebu’s biggest and grandest festival is celebrated on the third Sunday of January. Dancers wearing colorful costumes perform on the streets to the beat of drums, trumpets, gongs and other instruments in honor of the Santo Niño. Groups of kids and adults participate in this yearly event. Some women dance while bearing the statue of the saint.

More Philippines Festivals of 2017 to Enjoy

The term Sinulog is used to describe the way the dance is performed. Dancers take two steps forward and one step back. The dancing starts once the first Sunday Mass is over and continues all throughout the night.

Bacolod’s own celebration is based on more somber events. The Masskara Festival was organized after a series of catastrophes hit the province of Negros Occidental in 1980. It was designed as a means to uplift the spirits of the community. All of the dancers and performers wore smiling masks, symbolizing the people’s tenacity to persevere.

The tradition of wearing festive masks and colorful costumes have characterized this festival from the rest. Commonly held on the third weekend of October, groups dance to a tune blasted from speakers strategically located along several roads within the city. The final performance is made in front of a crowd of spectators waiting at the Bacolod Public Plaza.

These are the Philippines best known harvest festivals to honor San Isidro Labrador, the patron saint of farmers. Known as the “Pahiyas”, the festival is deeply rooted in the traditional celebration of the townsfolk in thanksgiving for bounty harvest. More information on this festival.

Quezon Province has a unique way of celebrating a good harvest. Every year on the 15th of May, houses along a pre-determined route are decorated with fresh produce and kiping. The kiping is a thin leaf-shaped wafer made out of rice paste and dyed in different colors. This festival is celebrated in Lucban although variations can also be found in the nearby towns of Tayabas and Sariaya.

On the first day, the animals are washed, painted and decorated before they are paraded through the streets.

On the first day, the animals are washed, painted and decorated before they are paraded through the streets. Some of the animals pull carts which act as a float for a specific village. Once they pass the Catholic Church, a select group of water buffalos are instructed to genuflect.

During the second day, a select group of carabaos are used to compete in a race. The animals race across a course while pulling a carriage. Towns known to celebrate this festival include Pulilan in Bulacan, Angono in Rizal and the town of San Isidro in Nueva Ecija.

Filipinos observe a number of holidays based on the Christian faith. One is Holy Week. In the Philippines, work stops for several days during Holy Week. Reenactments of the Passion of Jesus can be found in towns all over the country but none comes close to how the people in Cutud, Pampanga celebrate the occasion.

On Good Friday, a continuous stream of people walk through the streets carrying heavy crosses or whipping their backs until they bleed. Several people have their skin nicked on purpose using a razor blade to let the blood flow quicker. For some people, the walk of penitence ends in front of the Catholic Church. However, the bloody display doesn’t end there.

At around noon, a larger group of people begin reenacting the Passion on the streets. This group will continue to perform and walk towards a designated area where the man playing the role of Christ will be nailed on a massive wooden cross in front of a large crowd. Video cameras directed at the palms show the nail as it is being hammered down.

For travelers who wish to see some of the biggest festivals in the country without traveling very far, they can do so by attending the Aliwan Fiesta. Touted as “The Mother of All Fiestas,” the best performers from various festivals around the Philippines are invited to perform in Pasay City. The exact date varies from year to year but commonly held on a Saturday sometime in April or May.

Unlike other festivals in the country, it is not celebrated in honor of a saint or to commemorate a specific event. It is simply organized to entertain residents and travelers alike. Here, spectators can watch the best contingents from the Sinulog Festival, the Panagbenga Festival, the Sagayan Festival and more perform on stage.

Of course there is plenty of other things to do during a trip to the Philippines such as visiting some of the great resorts and beaches. Great places to head over to are the regions of Cebu and Batangas.

If you are in the region for a while be sure to soak up the atmosphere of the amazing Philippines festivals and beaches to be found in this part of the world.