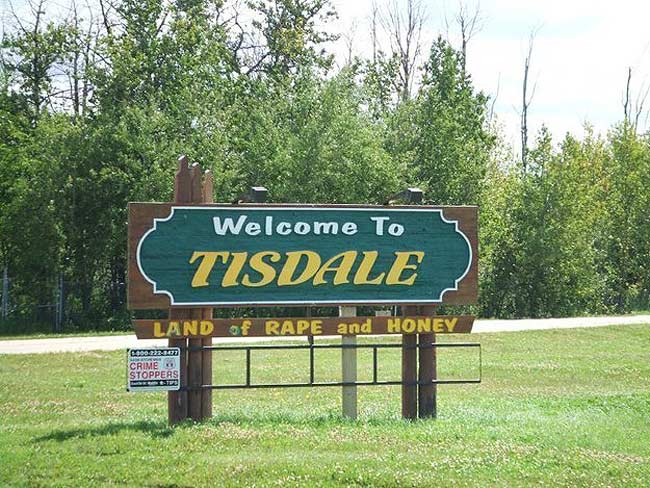 There are five towns in Canada you won’t believe exist. That’s right, from time to time we encounter some crazy offbeat travel stories and unusual oddities about the world. From strange city place names, to unusual landscapes and wildlife.

In this feature we present five Canadian towns that really just shouldn’t be on the travel map. Yet here they are, five unusual, weird and downright strange towns from Canada.

The Town of Swastika in Canada

Really you would think that a town with a name like ‘Swastika’ would struggle to bring in the tourists. To say the least its controversial and even in a thousand years unlikely to be fashionable, ever! However there is a town in Canada named Swastika in Ontario that refuses to change its town name. This is despite years of pressure from the government and local officials.

Swastika in Canada. A town named Swastika in Ontario refuses to change its name despite years of pressure

Citizens from the town of Swastika continue to argue their case. They state that their namesake town name was around long before Nazis elected to use the Swastika symbol. The Swastika is a symbol of enduring evil in world history.

The Town of Redditt in Ontario

Yes thats correct, you redditt right! There is actually a town named Redditt in Ontario, Canada where, until 1985, its town high street was called Highway 666. Later the main street was renamed as a church was located at the end of the street.

There is a town named Redditt in Ontario, where, until 1985, its main street was called Highway 666It was unlikely to be taken seriously as a place of worship without a quick rename. Equally the town name has absolutely nothing to do with social media and content feeds.

The Polar Bear Prison of Churchill

Churchill, Manitoba is known for the world’s first and only polar bear prison. Yes in the town of Churchill you will find a jail for naughty bears.

The Polar Bear Prison of Churchill, Manitoba, where bears like to be bad.It’s a prison holding cell with angry polar bear inmates who’ve been up to no good and have been assigned some hard jail time to reflect upon their bad behaviour.

No not the planet Vulcan. There is a town named Vulcan in Alberta, Canada and it’s been generating revenue and capitalizing off of its familiarity with the Star Trek name of the same.

The town of Vulcan in Alberta, CanadaVisitors to the Canadian town of Alberta will discover a town full of Star Trek museums, murals, conventions and shops. There is also an actual replica of the famous starship Enterprise from the Star Trek films and television series.

The city park of Kingston, Ontario now sits on top of a cemetery, and occasionally gravestones will surface. Sometimes referred to as The Skeleton Town.

Kingston City Park, Ontario, The Skeleton TownIn 1893, it was demanded by locals that the cemetery of this ‘Skeleton Town’ be removed. Henceforth work commenced on removing the remains of those buried in the graveyard to other cemeteries located in the area. However work ceased due to fear of a cholera epidemic.
In the city of Kingston, the City officials have been trying hard to keep the cemetery beneath the park untouched and as is.

Other strange city names in Canada include the town of Tisdale, affectionately labeled ‘ The land of Rape and Honey.’ Also by some fortune or misfortune, the town of Delta which is located in British Columbia has the cringeworthy mailing code V4G1N4. think what you will of that one.

There you have it, five towns in Canada you simply won’t believe exist. Strange places are everywhere. Unusual city names, haunted old towns and humorous associations.

Experience these five towns in Canada you won’t believe exist. Believe it or not they are all real places that you can find on any map. If you happen to be visiting Canada anytime soon then check out these travel agent secrets to finding cheap airfare. You could see all of the five towns in this article for far less than you might think

Check back again for weird and wonderful travel encounters and trip experiences and tales of exploration that seem just impossible to believe.

10 Incredible Parks Everyone Should Visit Once