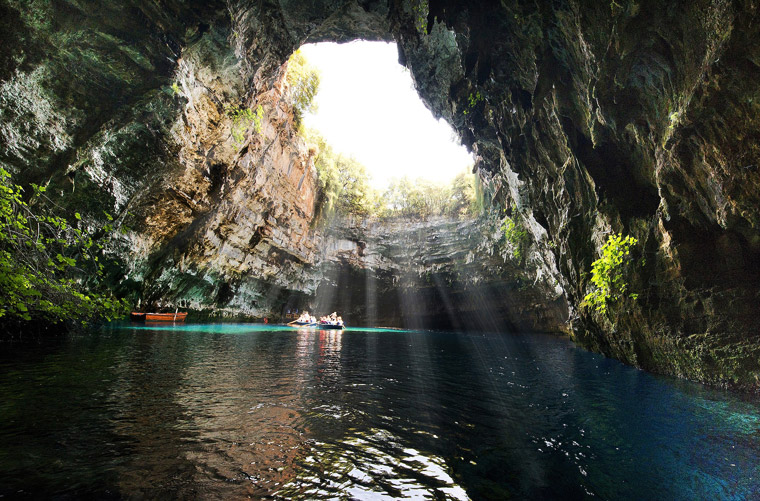 We present five unmissable Greek island experiences to explore and enjoy while on holiday in the Greek islands.

Greece is home to thousands of magical islands, each with their own personality, characteristics and opportunities. Some islands are large and populous while others are mysterious and remote.

To make sure you get the most out of the Greek Islands on your travels to Greece, we’ve listed five absolutely unmissable Greek island experiences that no trip to Greece would be complete without. Surf the coastal waters, scuba dive below the Mediterranean sea or explore dark secluded caves below ground. In the islands of Greece the choice of adventure is yours to make.

Surfing in the Waters of Lefkada

The island of Lefkada is legendary in the watersports world as it has some of the gnarliest waves in all of Europe. Vassiliki Beach, on Lefkada’s southern coast, is a particularly well-known spot for surfers on the island.

The island of Lefkada is legendary in the watersports world as it has some of the gnarliest waves in all of Europe.

Mediterranean winds get whipped up in the long, narrow cove, forming large waves perfect for watersports. For this reason any fan of surfing should visit the Lefkada for an unmissable Greek island experience.

Turtle Watching on the Isle of Zante

Well known as one of the Greek Islands’ top party destinations, Zante also has a peaceful, more gentle side. Thousands of Mediterranean loggerhead turtles come ashore to lay their eggs each year.

Turtle Watching on the Isle of Zante

Between April to June, visitors to the Greek island of Zante can spend their days out in the water, in search of these beautiful creatures, and nights watching them come ashore, digging their nests and laying their eggs before slinking back off into the pitch black ocean.

Watch some video footage of these remarkable turtles swimming in the waters and coming ashore onto the beaches of the Greek island of Zante.

To see such a creature in the wild is a rare and awe-inspiring sight, and one not to be missed. Turtle watching on Zante is certainly one of the top five Greek island experiences.

Santorini was formed by a violent volcanic explosion, one of the biggest in history, a few thousand years ago. The explosion obliterated the islanders and nearby settlements, but it also brought with it new life.

The volcanic eruption on Santorini displaced a lot of the seafloor and also led to the dumping of nutrient-rich sediment and volcanic matter into the caldera, a cauldron of seawater formed by the eruption. The Greek island of Santorini features also in our top five Mediterranean experiences.

Whilst there is a lot to do on the island of Santorini, there really is nowhere quite like it in all the Mediterranean when it comes to diving.

These nutrients caused life to spring up all throughout the caldera, and now divers can experience exotic fish and underwater plants, crustaceans and octopus, striking underwater landscapes and rock formations along with a host of cave systems.

Watch some video footage of scuba divers swimming in the waters  of the Greek island of Santorini.

Whilst there is a lot to do on the island of Santorini, there really is nowhere quite like it in all the Mediterranean when it comes to scuba diving in the Greek islands.

The Cave of Melissani on Kefalonia

On the Greek Island of Kefalonia, hidden just beneath the surface, is one of Greece’s best natural wonders. You can reach the Cave of Melissani on Kefalonia by boat and your journey begins at a small cave opening on the island’s rugged coast. As you delve deeper into this cavern you’ll be greeted by striking stalactites hanging from the walls like icicles.

On the Greek Island of Kefalonia, hidden just beneath the surface, is one of Greece’s best natural wonders. This being ‘The Cave of Melissani on Kefalonia.’

In a matter of minutes, you’ll make to the main event, a small underwater lake surrounded by luscious greenery and a bright natural skylight above. Light cascades in through this circular hole to the heavens, bringing life to this otherwise dark place hidden beneath the Greek island of Kefalonia.

The Greek island of Crete is home to a wide variety of things to see and experience, from its stunning beaches to its ancient ruins. However, one of its most standout and unique opportunities is a natural beauty hidden in the heart of the island.

The Samaria Gorge on Crete is a national park little with incredible mountains and ravines ripe for exploring. What really sets this place apart from other hiking destinations across Greece is its epic atmosphere and scale. Truly one of the top five Greek island experiences.

The Samaria Gorge on Crete is a national park little with incredible mountains and ravines ripe for exploring.

As if plucked from the pages of Game of Thrones, the sense of wonder and awe found when exploring the Samaria Gorge on Crete is unlike any other hiking trail in Greece. It simply has to be seen to be believed.

The waters that encircle the Greek mainland are full of exotic islands. Some of these Greek islands like Crete and large and populous. Other Greek islands are small, secluded and remote, waiting to be explored by boat. Whatever the focus of your holiday in the Greek islands. Be certain to enjoy at least one of these five unmissable Greek island experiences during the trip to Greece.

This feature article on unmissable Greek island experiences was produced with contribution from Cliff Blaylock, an expert in all things Greece.

Cliff has dived and sailed along its coasts for over twenty years. Now he owns and operates Deep Blue Yachting, a luxury yacht charter company based in the heart of the Ionian Sea.

Cliff Blaylock, professional diver turned luxury yachting holiday specialist. An experienced diver, Cliff has over three decades worth of dives under his mask.

Discover 5+1 HIDDEN, Untapped Destinations in Europe that you Must Visit!
The Most Beautiful Places in the World [Top 50] – Part 3