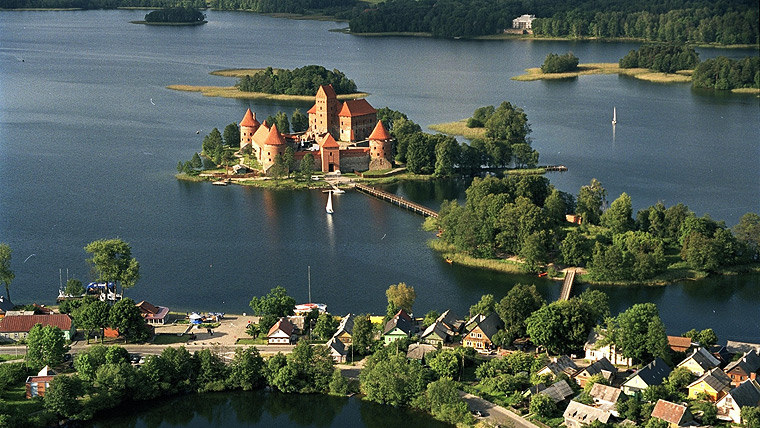 A trip to Lithuania will create memories to last a lifetime. Lithuania is the southern-most state of the Baltic Republics in Europe, neighbouring Latvia, Russia, Poland, and Belarus. It is one of Europe’s best tourist destinations known for its pristine lakes, forests and its medieval, gothic, renaissance, and baroque architecture.

This picturesque country is a treat for every romantic person that offers an array of fascinating sites from the white sand coastline and the wetlands filled with thousands of migrating birds to the cobbled streets and centuries old churches all knotted with the new age modern culture.

Indeed a trip to Lithuania represents an experience considerably removed from some more popular western European nations. There are less travelers and tourists overall and this presents real opportunity to explore the cultural sites with extended levels of freedom. So pick up the suitcase and book the flights, prepare to escape to Lithuania.

The Capital of Lithuania, Vilnius

The city of Vilnius is Lithuania’s capital. It is an old Eastern European city that best is known for its baroque architecture, seen especially in its medieval old town.

Yet the historic buildings of Vilnius that line this district’s partially cobblestoned old streets reflect diverse styles and eras in time.

From the neoclassical Vilnius Cathedral to the very different styled Gothic St. Anne’s Church. The 16th-century Gate of Dawn, that contains a shrine with a sacred Virgin Mary icon, once guarded an entrance to the original city of Vilnius.

Here are the ten breathtakingly beautiful places to see and explore in the country of Lithuania. Uncover the secrets of a trip to this beautiful nation.

Get to the mysterious Hill of Crosses, a national pilgrimage site of Lithuania, for hundreds of years.  Situated about 7 miles north of the small industrial city of Siauliai, the Hill of Crosses was declared a sacred place by the Pope in 1993. The site is situated on a hill and is home to an estimated 100,000 crosses.

It is believed that the tradition of leaving crosses on the hill began with the uprising against the Russian tsar in 1831. Since then, statues of the Virgin Mary, crucifixes, carvings and several effigies have been placed on this site. The site attracts thousands of Catholic pilgrims from across the world to plead with Jesus for miracles.

The Curonian Spit is an elongated sand dune peninsula that extends from the Sambian peninsula in the South to the port city of Klaipeda in the North.

This natural coastal wonder of Lithuania, a stretch of sand separating the Baltic Sea from the Curonian lagoon will humble your mortal soul by its colossal expanse and beauty.

It is famous for its shifting sand dunes, which is the largest in Europe with that goes upto 60 metres in height. Apart from the thin stretch of beautiful white sand, the Curonian Spit is mostly covered with forest. It is indeed a gorgeous site to visit, if you are looking to click some great pictures!

The beautiful Trakai Island Castle is situated in an island on Lake Galve, which is a defence fortress built in 1410 after the Battle of Grunenwald.

Today it is a much-visited venue for events like concerts, festivals and exhibitions. The museum in the castle is popular for its medieval exhibits. You can also take part in water sports like boating, water cycling, and yachting.

The Sights of Lithuania

Upon traveling to Lithuania expect to see castles, beaches, forests and lakes to name but a few types of place that travelers will encounter. A trip to Lithuania is an enchanting voyage. Take a moment to view a selection of traveler video clips and see.

Palanga is Lithuania’s largest seaside resort, which is a 10 km long beach bordered by white sandy beaches and forest.

Palanga is a Lithuanian summer paradise in the summer months and so nicknamed as “Summer Capital”.

The busy Basanaviciaus pedestrian street is most famous for its loud outdoor concerts every evening, display of lights, fountains and funfairs.  You can watch breathtaking sunsets and storms raging far out in the sea from the Sea Bridge in Palanga!

The Zverynas Bridge is an iron arch built on the Neris River in 1906 to connect the suburb with the city.

The Zverynas Bridge is a popular spot that overlooks the beautiful city of Vilnius with the thick forest at the back.

The Zverynas Bridge is located in Vilnius, the capital of Lithuania. The bridge was initially made of wood but was later built in iron to withstand the floods and heavy vehicles over the years.

Vente Cape is a unique locale in the Silute district on the eastern side of the Curonian lagoon, known as the kingdom of birds. Vente Cape is the resting place for thousands of birds during their autumn migration and makes it one of the most popular spots for migration in the world.

Venta Cape is a perfect getaway for ardent bird watchers. It is also one of the first bird banding stations in Europe. You can go up the old lighthouse to get a view of the beautiful scene of the bird kingdom.

Klaipeda is the third largest city of Lithuania. It was once the capital of the Prussian empire.

Klaipeda is famous for its old German and Scandinavian architecture, evident here unlike other cities of Lithuania. It is also the only port of call for cruise ships carrying thousands of passengers.

The Dane River cuts the city in two unique parts-the Old Town and the modern New Town. The Old Town is famous for its cobbled streets, timber-framed buildings, 12th-18th century architecture, shops, bars and restaurants and the New Town is home to the Klaipeda University and some major train and bus stations.

Trakai is the historic capital of ancient Lithuania. This quaint beauty is located in between hills, forests and lakes. It is a very popular tourist destination in Lithuania, most famous for its wooden architecture, lakeside sceneries and the magnificent Trakai Island Castle.

You can take long peaceful soul-filling walks beside the lake or even take a yacht to different islands. Trakai is a treat to the eyes and the soul.

The Parnidis Dune is a 52 metres high sand dune located on the outskirts in the town of Nida. It is one of the more unique sights to see and places to explore in Lithuania.

A granite sundial built on Parnidis Dune shows accurate time following the path of the sun. The dune is very popular among tourists, locals and sightseers.

The observation deck on top of the Parnidis Dune gives a spectacular view of the surrounding area. The dune is a fragile habitat and has been decreasing in height due to people who romp in the sand, yes really! It is important that you stick to the designated path while spending time at the Parnidis Dune.

Imagine vast fields of never-ending yellow flowers under the limitless blue sky with a near perfect weather. This is not out of a story book; this is what Lithuania offers! Rapeseed is cultivated in large amounts to make canola oil.

The rapeseed fields in Lithuania are an awe-inspiring site in June and are famous world over for its scenic beauty. The splendour of these yellow fields cannot be missed when in Lithuania in June!

Speaking of June and the hot summer months lets consider the best time to take a trip to Lithuania. The climate in Lithuania is moderate. Generally, the weather is best during the months of May to September.

It is during this time that days are warm and the nights are cool, although it rains more in Spring than in summer. Autumn and Winter seasons in the country are often a little chilly, damp and wet, sometimes snowy and often grey, misty and foggy.

Pack up your bags and leave the city life for a break because a trip to Lithuania is calling out to the soul searcher in you. Many popular newspapers have covered Lithuania recently. As a destination it is definitely getting more popular so plan a trip and see for yourself.